Who has not suffered from gastritis at some point?

Gastritis is believed to affect about half of people worldwide[1]. Most of these people therefore resort, several times a year, to solutions which often do not prevent recurrences.
Acute or chronic inflammation of the mucosa lining of the stomach, gastritis is a phenomenon that can be punctual when it is due to a bacterium or a virus, but in most cases it is chronic. It manifests by more or less intense heartburn and digestive disturbances.
The causes of gastritis are numerous: autoimmune, caused by a bacterial infection of the stomach – Helicobacter pylori (the most frequently encountered in about 80% of cases) – or linked to external chemical aggressions such as alcohol, tobacco consumption or some medications. Often, the exact cause can not be identified but it would appear that stress (chronic) is also involved or is an aggravating factor.
Treatments exist to either reduce or neutralise acids in the stomach, or to encourage the healing of ulcers. Antibiotics are used when infection with Helicobacter pylori is diagnosed.
However, it is generally recommended to abstain from smoking or drinking alcohol, to stop taking medicines associated with heartburn as side effects, and even to observe strict diets. 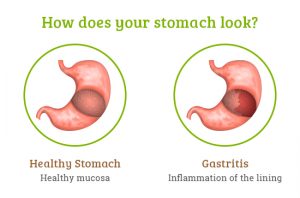 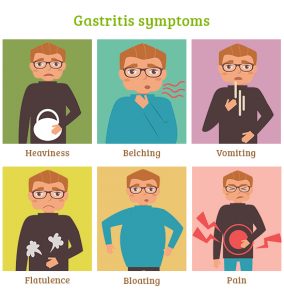 4 plants to relieve inflammation due to Gastritis

Fenugreek is a Mediterranean leguminous plant that is among the oldest medicinal plants in the history of mankind. A very rich spice, it contains phosphorus, iron, sulfur, nicotinic acid, alkaloids, flavonoids, carbohydrates, vitamins A, B1, C, magnesium, calcium, lecithin, proteins ( 30%), and steroid saponins which contribute to the synthesis of cholesterol and fibers.

Fenugreek is known for its anti-ulcer effects and appetite stimulants

Indeed, several studies have been conducted to study the impact of fenugreek (Trigonella foenum graecum) on gastric ulcer[2-3] particularly in relation to drugs such as omeprazole. They have demonstrated the potent cytoprotective (cells protecting) action of fenugreek seeds, in particular thanks to:

– Its mucilages and galactomannans :polysaccharides with protective effects on the mucous membranes of the stomach and intestine, gastric function, small intestine and colon. Indeed, they help soothe gastrointestinal inflammation by forming a kind of coating on the walls.

–  A fast and powerful anti-secretory action: active fenugreek inhibits the secretion of hydrochloric acid by the parietal cells of the stomach.

All these observations show that fenugreek seeds have a real anti-ulcer potential .

More broadly, fenugreek is a tonic in cases of fatigue, stimulating the pancreas. It is also anti-inflammatory. The leaves of fenugreek are bitter, they tone the liver, stimulate the production of bile and its expulsion by the gallbladder (stimulates bile excretion of cholesterol and reduces blood levels of triglycerides and LDL cholesterol). Finally, fenugreek could also have, according to serious studies, a preventive effect on the occurrence of colon cancer, breast cancer and of the gallbladder.

Studies conducted by teams of researchers have shown that fenugreek seeds contain an unconventional amino acid, 4-hydroxyisoleucine, with especially interesting[4] insulin-stimulating properties. Indeed, by acting on the pancreatic cells, the said molecule, which does not exist in humans nor in animals, stimulates insulin secretion.

The main interest of hydroxyisoleucine in stimulating insulin, is that its action is very different from sulfonylurea agents  (anti-diabetic drugs) currently used in the treatment of diabetes, since it has no hypoglycemic side effect [5].
Meanwhile, it is important to note that only  100% natural extracts of Fenugreek provide the guaranted dosage of 20% hydroxyisoleucine .

Lemon balm has been cultivated since ancient Greece for its soothing and especially its digestive properties. It helps regulate nerve impulses and thereby reduces spasms of the stomach and colon.

Various studies[6-7] have highlighted the active ingredients of lemon balm, such as:

This research has enabled the WHO and other health agencies (AEM ESCOP) to validate the benefits of lemon balm, in particular for the symptomatic treatment of digestive disorders, such as pain and gastrointestinal spasms as well as bloating. By promoting bile secretion, it helps smooth digestion and helps prevent or relieve nausea and vomiting.

Its soothing action also helps to fight against nervous tension and irritability and facilitates sleep.

Dandelion is a plant rich in potassium, iron, calcium, copper, silica and manganese. It also contains fatty acids, choline (an important nutrient for the liver), vitamins B complex, vitamins C, D and K as well as flavonoids and carotenoids.

In addition, its root only, produces insulin and complex sugars, as well as substances that promote the proliferation of beneficial intestinal bacteria[8].
Dandelion has been mainly used to treat disorders of the liver and gallbladder and its global “detoxifying” effect: it has a safe diuretic action without adverse effects. Trials conducted in recent years have indeed demonstrated that the dandelion can increase the elimination of urine and bile production and has an anti-inflammatory effect. Another study, dated from 2006, confirmed the antioxidant, anticancer and antidiabetic properties of the dandelion and its compounds.
Finally, preliminary clinical trials indicate that certain products containing dandelion can relieve intestinal cramps, constipation and diarrhea[9].

Sage is known as one of the oldest cultivated plants. It is an excellent source of vitamin K and iron.

It is recommended for its relaxing and antispasmodic action on the muscles of the stomach and intestines as well as its ability to increase the secretion of bile[10].
It thus relieves stomach cramps and plays a gastro-protective role (anti heartburn) and is particularly effective against bloating and intestinal gas.
Tests in rodents have shown that consumption of sage significantly increases the antioxidant activity of an enzyme produced by the liver[11]. It contains two phenolic compounds, rosmarinic acid and luteolin which possess antioxidant effects. It is particularly recommended to treat digestive disorders: slow and difficult digestion, vomiting, bloating and intestinal fermentation.
Other studies have also highlighted its ability to improve cognitive function and decrease agitation for elderly with Alzheimer’s disease and reduce blood sugar levels in cases of mild diabetes.

4 plants for an efficient and durable action:
Consuming fenugreek, offering 20% hydroxyisoleucine dosage, combined with lemon balm, dandelion and sage thus relieves inflammation due to gastritis, reduces spasms of the stomach and intestines, stimulates the liver and restores balance to prevent any recurrence, especially in cases of chronic gastritis.

Meanwhile it is not recommended to prepare this combination by yourself,  and if extracts of these plants are available on the market, finding one designed for a global and synergistic action will ensure the desired results.