Urinary tract infections (UTIs) are among the most common bacterial infections, affecting 150 million people each year worldwide[1] and 50 times more women than men.

Why are women more affected than men?

Because the anatomy of the female urinary system considerably increases the risk of urinary infections. Indeed, the shorter urethra of women, facilitates contamination of the bladder by the bacteria. Moreover, a “simple” intestinal or vaginal imbalance may create an ideal environment for the multiplication of bacteria that easily reach the urethra which is very close.
Other factors more or less directly can promote UTIs: sexual intercourse, pregnancy, oral contraceptives, fatigue, constipation, digestive candidiasis, etc.

Urinary infections, defined by pain during urination (small stinging, inconveniences, or burns), are commonplace and most of the time, related to an infection by the bacterium Escherichia Coli (E. coli). It colonises the urethra and the bladder (cystitis) and can be traced back to the kidney, in this case, it is a pyelonephritis.

As early as the first symptoms, “conventional” medicine proposes to curb the infection with antibiotics, which is efficient but does not prevent recurrences which are quite frequent.

Why such a high recurrence rate?

During the urinary infections it causes, the Escherichia Coli bacteria colonises the inside of the uroepitheliales cells (of the bladder) and sticks to the wall of the mucous membranes (forming a P-fimbriae). It allows it to fight against our immune system and resist antibiotics. In 20% of cases, after treatment with antibiotics, the long”hidden” fibers of e.coli  then come out of the cells and thus generate a new infectious episode. It then gets worst: 30% of these women will experience a third infection and 80% of these women a fourth, etc.

This is why it is very important to prevent these recurrences, by respecting a healthy lifestyle (drinking enough water, urinating after intercourse, avoid retention of urine, etc.) and working on the general field with an in-depth herbal treatment which promotes renal elimination and the final eradication of the bacteria. 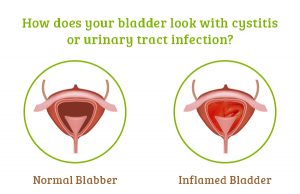 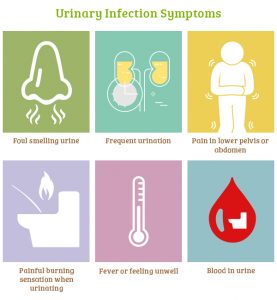 Since ancient times numerous properties have been given to white nettle, but it is best known for its remineralising and restorative properties. It contains many minerals (calcium, chlorine, magnesium, phosphorus, manganese, potassium, sulfur, zinc, and particularly iron and silicon) and vitamins (particularly B2, B5, B9, C, E and provitamin A). These properties make it, alone, a great “support” in the treatment of urinary infections. Add to that its content in phytosterols and phenolics and it also promotes renal elimination, treat and prevent the formation of kidney stones and “cleans up” the urinary tract.

It should be noted that its diuretic action is different from couchgrass. Indeed, it stimulates diuresis only if (and while) there is an overload of nitrogen waste to eliminate: the minerals that it contains stimulates the acid-base buffer system and increases the acidity of urine and thus stimulates the excretion of nitrogenous waste. When elimination of waste is complete, the tonic and regenerating virtues of white nettle on the kidney take over.

Studies have also shown that white nettle stimulates and strengthens the prostate on patients affected by benign prostate hypertrophy (phases I and II) and can relieve various urinary problems associated with this condition[10].

Known for decades in north America, cranberry has been consumed there as a traditional remedy against urinary infections. Since 2004, this property has been recognized in Europe by Afssa[2] and the cranberry benefits from the very official claim: “Helps reduce the attachment of some e. coli bacteria on the walls of the urinary tract”.

These berries owe their properties to several molecules they contain such as hippurique acid, fructose, vitamin C and of proanthocyanidins. A study of 1984[3] shows that these, like an antibiotic, adversely affect the adhesion of bacteria to the uroepitheliale cells of the bladder wall by changing the chemical composition of urine.

Cranberry consumption is therefore particularly effective in women to prevent and relieve urinary infections[4].
Recent tests also proved that the anti-adhesive effects of cranberry are “immediate” and long lasting, since they are felt two hours after consumption and last up to ten hours. Consumption of cranberry will at the same time enable to reduce by 40% the risk of recurrent infections.

In 2001, a research was published on women with a problem of new urinary infections[5]. They were followed over a period of 12 months and the tests have established that the risk to develop a new urinary infection has been reduced by 20% in patients treated with a concentration of cranberry.

Finally, a Canadian study published in 2002 compared in a randomized and prospective way three treatments[6] (cranberry juice, cranberry tablets and placebo treatments): tablets and cranberry juice have (same way) reduced the number of UTIs in comparison with the placebo by approximately 15% per year.

On the other hand, it was noted in recent years that the E. coli bacterium, which causes 80 to 90% of these infections, is becoming increasingly resistant to antibiotics but that the antibacterial compounds of the cranberry act on 80% of antibiotic-resistant bacteria.

You should also know that it contains different types of flavonoids, powerful antioxidants that can neutralize free radicals in the body and, thus, prevent the emergence of cardiovascular disease, some cancers and various diseases related to aging.

Today, heather is known for its diuretic properties, urogenital antiseptic effect and its anti-inflammatory action. The heather is thus particularly suitable against cystitis, colibacillosis, but also to fight agains inflammation of the urethra and prostate. Moreover, this plant is also “called upon” for the prevention of UTIs in association with cranberry.

It is the presence of flavonoids and tannins in the composition of the heather which gives a powerful anti-inflammatory virtue. These considerably help to reduce very sharp pain that accompany non complicated lower urinary infections (cystitis).

Heather also contains arbutoside, which has antibacterial properties when it changes in the kidney into hydroquinone. Indeed, it has been shown that the arbutin killed some urine bacteria such as Escherichia coli and Staphylococcus aureus bacteria[7]. It is necessary to add that the heather frees its anti-infective principle exactly where it is required making a urinary and intestinal antiseptic particularly effective.

But the Heather has a mostly recognized action in increasing diuresis, which promotes the elimination of toxins and excess uric acid oxalic acid found mainly in urine during episodes of cystitis.

Heather’s diuretic virtues, with a strong disinfectant action, make it more generally used as treatment of the kidneys, as well as in the treatment of heart failure, rheumatism and gout.

Since antiquity, couchgrass is recognized for its diuretic virtues and it is particularly recommended to “dissolve” urinary stones. Today it is very popular for its benefits on the urinary system in general and against gout.
There are few studies on its properties but however its ancestral use in the management of urinary stones was supported by a scientific study on animals that has highlighted a positive action on urinary lithiasis[8].

Very rich in fructosanes, couchgrass is recommended during bladder infections for its stimulating effect of diuresis[9]. Promoting the kidney elimination, it can also more typically be used in problems of water retention such as edema. It therefore has, such as cranberry and heather, an action on urinary infections but also on the risk of recurrences.

An American, RD Hagin, also highlighted the presence of a lot of 5-OH-tryptophan in couchgrass. This metabolic precursor of serotonin – a major neurotransmitter – is involved in the management of sleep, pain and thymic state. This compound gives couchgrass real relaxing virtues especially during inflammatory crises triggered by a urinary tract infection.

Each of the above plants has benefits with their own properties. If these seem close to each other, the important message to remember here is that to get an effective and targeted action, you need to “associate” them for their synergistic action.
Only a complex of all these active ingredients enables the prevention and relief of urinary infection by acting on several “aspects”. But beware: consuming a complex of plant extracts can be potentially dangerous, and because of the large variation of composition of natural products available on the market, it is essential to ensure the provenance, the dosage, and the concentration of the active ingredients of the products.